My boss and good friend John Gallant once told me I’m one of the most positive people he knows. I was keeping a sunny disposition despite the Internet being down or something like that. I’m definitely a sunnier person than I used to be. To be truthful, though, sometimes it’s just an act.

What brings me to that line of thinking is the crime wave of depression that hit me this weekend. It was pretty bad this time; possibly the worst I’ve felt all year.

I can’t quite put my finger on what caused it. I wasn’t angry with anyone or about anything in particular. It didn’t help that the days were mixed with teases of sunshine that were snatched away by some thick clouds. When the weather does that, it’s like someone reneged on a promise to bring me light. My eating was fine, typically in keeping with my 12-Step program. So what gives?

Far as I can tell, the problem was a serious sleep deficit. Last week was a busy one, with travel, a lot of writing and editing, and appointments. The writing usually energizes me. The appointments, not so much. I was averaging five hours of sleep per night, which has usually served me well. But as I get older, I’m having more trouble getting rest right.

Could it be that rising at 4 a.m. is becoming harmful to my mental polarity, knocking the brain chemistry too far out of whack for the medication to keep up with? I hope not, because that’s my favorite time of day for writing.

Fortunately, my brand of depression isn’t the suicidal kind. I don’t crawl into a dark corner and lament the day I was born. I do get withdrawn. I get very serious, and I do tire more easily. There’s this weird thing that happens with my vision.

I can see everything, but there’s a haze. It’s like I’m staring at someone but staring into space at the same time. The eyes themselves itch and buzz a bit. It makes me think of the Star Wars art where someone under the influence of the dark side of the force develops a strange light around the eyes. It sounds melodramatic, but it’s the best way I can describe it.

This was not a good weekend to be this way. Yesterday was Duncan’s birthday party, and the day before there was a lot of cleaning to do. Erin wasn’t happy with me for getting home late from my OA meeting because she had stuff to do. I think that might have set off my mood, though it’s hard to tell for sure. I don’t blame her for being pissed at me. Sometimes the commitment to my program of abstinence and sobriety can cast a big shadow. In my mind, I’m putting my family first and balancing all these other things around that. In reality, I have work to do.

I think the big trigger this weekend was the realization that I might be doing too many things. There’s the book project, a wonderful BUT demanding job and all that service: Being an OA sponsor, being on team for a Catholic retreat next month, which involves lots of meetings and homework, and the occasional Saturday morning working the church food pantry. Saturday afternoon was spent writing a talk I’ll be giving at that retreat.

It’s an odd sort of conflict to have. On the one hand, I’m able to do all these things — I crave it, actually — because I cleaned up from my addiction and learned to manage my mental disorder most of the time. A lot of space in my brain that was taken up with crazy thinking, fear and paranoia was suddenly freed up, and I found I could do all these other things.

But I’m not Superman, and I’m starting to see where my limitations are. I know I have to make adjustments as a result. That pisses me off. I lost a lot during those years of mental illness and addiction. It robbed me blind. I don’t want to give up anything that I’ve gained.

What’s all this have to do with acting positive?

I’ve made it a point, no matter how crummy I feel, to put on the positive man’s mask. It’s important for a variety of reasons.

On Facebook, for example, so many people bitch and moan about the little inconveniences in their lives that you simply need positive people on there to balance things out. I prefer to be one of the latter people. Maybe I can’t always make myself feel good. But if I can make others feel better by saying something positive, it’s better than nothing.

One of my political heroes, Franklin Delano Roosevelt, was a master at this. He was known for his “ebullience” and he was rarely photographed without that huge, toothy smile.

In private, however, he had a lot of pain. Polio had taken away his freedom of movement. He put on a good act in public, using a cane, leg braces and the arm of one of his sons to make it look like he was standing and walking without effort. The truth is that those were moments of blinding physical pain. But he kept the sunny disposition and it was just what people needed at the height of the Great Depression. 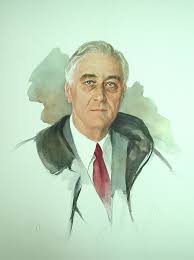 As WW II slogged on, his photos were a lot less ebullient and you could clearly see the strain. He had met his match, and it cracked his positive mask.

My issues are nothing compared to what he went through. But in my own little world, I’ve run up against that wall that cracked my own mask.

It’s time to go find the glue and put it back on.

This morning I do feel a little better. At Erin’s insistence I went to bed at 7:30 last night and I’ll do it again tonight.

We’ll see how that works. I’m just grateful to have a wife who knows what signs to look for and how to help me through it. The kids help, too, keeping me laughing with their verbal zingers.

God certainly helps. Writing that talk Saturday allowed me to work through some of what I was feeling.

I have all the tools I need to get through these rough spots.

I just have to remember that one of those tools needs to be the ability to slow down.

3 thoughts on “The Positive Man’s Mask”